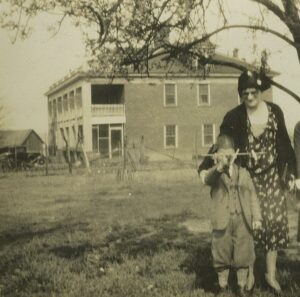 From the Family Custodian:

From birth, I crawled the halls of this home owned by my Great Uncle, Melvin Chapman Bowers (Uncle Chap), whose grandfather Job II, an abolitionist and religious pacifist and publisher, laid out the town where the old hotel lies, after renaming it from West Bowersville to Canon, GA. I played in the fertile hills surrounding The Bowers House in the county founded by my 7th great grandfather, Job Bowers The First, who was a Revolutionary War hero killed by The Tories while on leave for the birth of his only son. I gazed in wonder at the stain glass window images installed by Uncle Chap’s father who brought The Universalist Church to Georgia where it is still active 125 years later.

I am proud that both of my mother’s parents were born in these parts, and grateful to my Bowers relatives and friends who helped me get started as the new family Custodian of this paint chipped, sprawling homestead. My cousins, Ellen Bowers Davenport (a native of Canon) and Phebe Bowers Armas, assist in running the lodging and retreat operations. My loving partner, Dorjan Williams, is The Bowers House Program Director also executive producer of ‘Bowers Hour’ episodic broadcasts featuring the work product and creative output of our residents via their musical concerts, art workshops, literary guild activities and readings and documentation of resident artists’ retreats and activity. As 2022 rolls in we are facing and discovering necessary health precautions, crucial restoration and funding opportunities, university and professional sponsorship affiliations. We are restoring the historic registry commercial buildings on our city block and expanding our reach and scope and enhanced exposure via programming through ‘Bowers Hour’ and expanding community involved entertainment, enlightenment and activities. The Bowers House offers retreat directors, arts organization and artist/writer residents lodging and peaceful solace to work and focus their creativity. History buffs and curiosity seekers can rent rooms or the entire home when available. Our mission is to offer residencies and encouragement to multicultural/ minority/ underserved writers and creatives via sponsorships and donation supported by visiting guest stays and established retreat and lodging/event rentals.

We appreciate your contribution to our mission by staying at and supporting The Bowers House. We try to ensure your optimized retreat or lodging experience and are prepared and adaptable in setup for your group’s area of interest. Please call us to arrange your stay at 100 Depot Street Box 74, Canon, Georgia 30520  404-358-3678     954-888-8948 bowershouse.org

Laura Bowers Foreman, former owner of the Bowers House and director of the literary center is a writer. Several years ago she decided to turn her large and elegant old family home into a multipurpose resource for writers and readers from the Southeast as well as from throughout the country.

She invited the long-established Georgia Review  to be associated with the retreat center to help the Bowers House gain initial credibility and to serve in particular the interests of the Review’s authors and followers.

The Bowers House was constructed in the early 1920s as a hotel to accommodate railroad passengers, many of them businessmen in the cotton trade, who traveled the line that passed by a mere hundred yards from the hotel’s front entrance. The hotel failed during the Great Depression, and at that time the structure—with its eight bedrooms and some 4,000 square feet of space on two floors featuring classic southern columns and wraparound porches—was purchased by Foreman’s grandparents and converted to a private residence.

Family came to the old Bowers house for an afternoon of iced tea and stayed six months.

So begins The Lessons of Lilies, a memoir written by Laura Bowers Foreman (part of the collection of family memoirs, My Mother’s Tattoo) about The Bowers House.  The home passed down to Foreman’s parents and then, at the death of her father five years ago, to her. Under her father’s guidance, the Bowers House was fully renovated to its original historic beauty in the early 1990s.

A longtime resident of the Seattle area, Foreman hit upon the idea of the literary center as a way both to keep the house in the family and to provide services to other practitioners of the writing craft to which she is devoted.

In addition to its designation as a writer’s retreat, The Bowers House also hosts workshops, readings and other literary and community events. Arts organizations and informal writer’s or creative groups are also able to rent the Bowers House to conduct their own programs and in 2021, expanded our services to musician workshops, songwriting retreats and Bowers Hour Concerts. Painters and Photographers have started booking, and pleinair activity has begun. Next year, The Georgia Review will send three National Endowment for The Arts Grant recipients for a month’s residency in The Bowers House, specifically focusing on the diaspora of The Southeastern United States.

If you are interested in *making a donation or volunteering please make your check payable to THE BOWERS HOUSE and send to:

Your donation is greatly appreciated, but not currently tax deductible. Thank you for your contributions to The Bowers House.