at The Bowers House Writers Retreat

Are you struggling to bring your fiction characters to life on the page?
Want to create more lovable heroes and hateful villains that readers simply can’t get enough of?
Looking to publish a book that will live on in the hearts and minds of readers forever?

If so, then don’t miss the Writers Guild Retreat at The Bowers House focusing on FICTIONAL CHARACTER DEVELOPMENT.

Inside this intensive three-day workshop, you’ll learn how to create unforgettable characters that propel your plot forward and grab your reader’s attention – page after page. Led by Charles Prier, accomplished author and publisher, this game-changing event includes dynamic presentations, videos, group discussions, hands-on writing exercises and assignments. This illuminating retreat also includes a fictional character immersion session with special guest, Javon Johnson, an award-winning writer, educator and actor. Once the weekend comes to a close, you’ll walk away with the knowledge, skills and confidence to craft riveting characters that animate your story and deliver your message to the world. Ready to elevate your writing skills and learn how to create captivating characters?

Terry Kay, George Singleton, Alice Friman, Scott Russell Sanders, Anne Pancake, Alison Hawthorne Deming … these are just a few of The Georgia Review alums who have sought refuge at The Bowers House to further hone their craft and perfect their stories before releasing them to the world.

For decades, this 100-year-old historic registry railroad hotel nestled in the sleepy hamlet of Canon has provided writers with the seclusion and inspiration they needed to move forward with their most important works. Perhaps their creativity ripened under starry nights or amid spiral-vined gardens, in the thick shade of towering magnolias or the comforting embrace of the wraparound porch here at The Bowers House. If you’re ready to follow in the footsteps of some of the most acclaimed authors out there, consider a retreat or residency with us.

Charles Prier has been a writer for 30 years with stints in trade publishing, the tech industry, local news and fiction. As director of Writers Guild at The Bowers House for the past 12 years, he has mentored and coached countless members on their journeys to become published authors. The author of four books,

Charles has also edited and published the work of more than 20 members.

We are thrilled to welcome Javon Johnson to the January 2023 retreat. An award-winning writer whose work includes musicals, films and literary fiction,Javon is also an educator and talented actor who has appeared on “The Oval” (2019), “American Soul” (2019) and “Survivor’s Remorse” (2014). Johnson will conduct a fictional character immersion session from the dual perspective of an actor and a writer while sharing his favorite character development exercises and techniques. 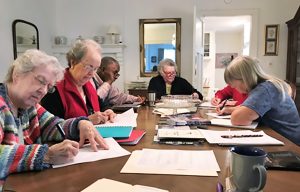 Want to get the ongoing support and guidance you need to become a better writer? Then join Writers Guild at The Bowers House. The group meets on the second Wednesday of each month from 1-3 p.m. For $25 a year, you’ll receive coaching and lesson plans from Charles Prier, valuable feedback from peers, and a chance to meet and learn from writers just like you. Membership is open to writers at every skill level. We are currently developing remote attendance guidelines so non-local members can participate in group discussions. Visit bhwriters.org for details. The Bowers House is available for group overnight rentals to writers and artists and individual member residencies. Donations and sponsorships are encouraged. Call family custodian Charlie Read at 954-888-8948.